To Be The Best Do We Need to Be in the Big Pond? 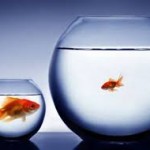 How often have you heard someone say; when applying to college we should go to the most prestigious school we can. When interviewing for a job we should work for the biggest name company with the most influence, and when playing a sport we should aim to play for the top team in the best league. The thinking being that if we want to be the best then we need to surround ourselves with the best.

Seems logical doesn’t it? After all we know that being in an environment with a cluster of talent not only makes us more productive, it helps us raise our game.  And of course, who wouldn’t agree that there’s a certain cache and credibility associated with competing in a big pond, whether it’s attending a prestigious university, playing a sport at an elite level or working at a large, highly regarded company.

So then one would naturally think that if we want to be the best we should seek out ever-larger ponds to swim in, even if that means being the small fish in that pond.

But, what if our theory is wrong? What if that’s not the way to be the best? What if there are costs associated with being a small fish in a big pond that are not readily apparent to us?

Well-known author Malcolm Gladwell challenges this very notion in his recent book, David and Goliath. In his book Gladwell cites the example of an exceptionally bright science student at an Ivy League college. This is a student who has always gotten A’s. Yet, now in the company of her uber smart college peers she finds she’s getting B’s and C’s for the first time in her life. Comparing her performance to these classmates leads her to believe that she’s not good at science and her lack of confidence in her performance ultimately causes her to drop out of the science program.

As Gladwell points out, because she only compared herself to her peers she became demoralized. If she had compared herself to science students the world over she would have seen that’s she’s still a very gifted student and, that she’s more talented than 99% of science students out there. As well, if perhaps she had gone to another very good though less prestigious college she would likely have been in the top half of her class, and she probably wouldn’t have dropped out of the program.

The point being that sometimes choosing the big pond can actually hurt us instead of help us because it makes us feel worse about our abilities. In this case going to the most prestigious school served to thwart this student’s ambition.

As Malcolm Gladwell’s example suggests, our confidence in our abilities relative to our peers plays a very important role in determining our potential for success. And he’s not alone. A number of studies have drawn much the same conclusion.

For instance, in a 2003 study, well-respected Oxford University educational psychologist Herbert Marsh studied the affects of academically select schools as a means of increasing academic “self-concept” or self-confidence. Marsh and his colleagues observed 4,000 15 year olds from each of 26 different countries and found that gifted students in gifted schools actually had lower academic self-confidence and felt worse about their academic abilities than students attending a non-selective school.

So, all this has me thinking that maybe being the best doesn’t mean we have to compete in the biggest pond, rather we just need to find the “right size” pond where we’ll be challenged, we’ll grow and, we’ll build confidence.

Now, finding that my friend is a blog post for another day.

Want To Succeed? Don't Check Your Email - And Work Out At Lunch